Anchoring in a Brandless World The premise was simple. Create and sell generic household staples, mostly for $3 each, with simplified, but upscale sounding product names, delivered in simple packaging.

The idea took off, at least among investors. In July of 2018, Brandless announced that SoftBank’s $100 billion Vision Fund had invested $240 million. 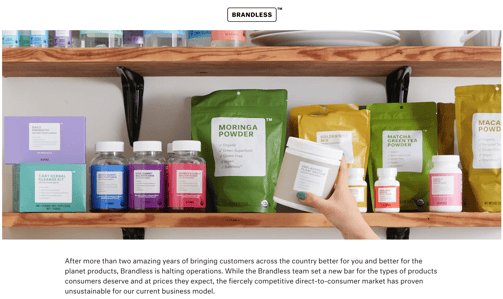 Unfortunately, the high hopes of the generic direct-to-consumer model were not enough.

Brandless did not go quietly. They raised prices as high as $9, but to no avail. The company abruptly shuttered up its low-price operations.

While there were obvious fundamental issues with company operations, there was also a human bias operating behind the scenes that helped bring Brandless down.

Anchoring and The Science Behind How Our Brains Work

Anchoring is a cognitive bias that unconsciously impacts decision making. Anchoring occurs when people use an initial piece of information to make subsequent judgments. Once an anchor is "set", other judgments are made by adjusting away from that initial reference point, rather than making decisions based on unbiased information alone.

The anchoring effect was first written about in 1974 by Amos Tversky and Daniel Kahneman. "People make estimates by starting from an initial value that is adjusted to yield the final answer...Different starting points yield different estimates, which are biased toward the initial values." 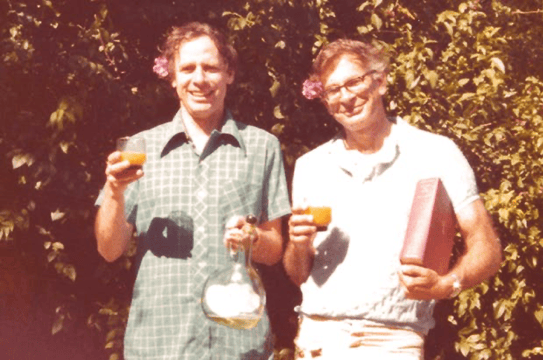 Amos Tversky and Daniel Kahneman in the late 1970s, photographed in the garden of Tversky’s house in Stanford, California.

The two behavioral economists found that even arbitrary numbers could lead people to make incorrect estimates. In one seminal experiment, volunteers spun a wheel to select a number between 0 and 100.

The volunteers were then asked to adjust that number up or down to indicate how many African countries were in the U.N. Those who spun a high number gave higher estimates while those who spun a low number gave lower estimates. In each case, the participants were using that initial number as their anchor point to base their decision.

Further studies have shown that anchoring is very difficult to avoid.

Brandless had a two-fold anchoring problem.

When Brandless launched, they dropped a massive anchor. All products cost $3. Consumer expectations were set from day one. Shifting consumer perceptions away from the initial reference price is extremely hard.

Keeping up with the low price point likely led to suboptimal package configurations and options. It also caused cracks in Brandless' brand foundation when they adjusted pricing to account for shipping and other rising costs.

The anchoring effect also comes into play with all generic brands. Kroger, Target, Costco, Walgreens, and others successfully sell private label (also known as Own Brands at some retailers). Trader Joes' and Aldi exclusively have built their business on their own cult classic generics. Why can they do what Brandless could not?

People made up their minds on these retailers before they bought generics. They walked into their stores and understood these retailers would stand behind any issues. Brandless was an unknown brand.

What Marketers Should Do About Anchoring

There are a few behavioral science and shopper marketing principles to consider as you build products and design marketing to close the sale. Here are three quick considerations to better design for the shopper mindset based on the anchoring effect.

Think carefully about how you structure your product range and pricing. People will anchor whether you intend for them to do so. This is one reason companies like Procter and Gamble offer a range of brands in the same category (low price, mid-range, and premium).

While we don't advocate manipulating pricing, promotions are a mainstay of retail. Just highlight the discounted price alone does not help shoppers understand they are getting a bargain. Illustrate the savings to the shopper by highlighting the original cost to serve as an anchor. Representing the actual value of the item, and then showing the new price, gives more weight to the discount.

Lead With Your Core Benefit

Anchoring isn’t only about pricing. Just like the $3 price point was not the only thing that took Brandless down. Leading with a single-minded message about your brand not only cuts through the clutter, it also helps shape how people interpret all the information about your product or service. Ensuring your brand benefit is instantly recognized, understood, and compelling goes a long way to converting the shopper into a buyer

Research suggests that being the first one to lay your cards down on the table is the best way to go. The anchoring effect makes the first offer the starting point for negotiations. The first reference point can bias negotiations in your favor.

SellCheck seeks to help marketers do their best by providing clarity and confidence through the discipline of creative effectiveness. Our "Designing for the Shopper Mindset" Series was created to help you improve your business by highlighting key design principles and what to do about it to be more effective.

SellCheck is a marketing research platform designed to streamline the creative process, produce better marketing, and boost sales. Whether creating digital ads, in-store signage, or packaging, science-based design principles can improve your creative effectiveness. Why is this important? Ads optimized for selling outperform those that are not by 30% or more.

Please contact Chris Bedford (Chris@sellcheck.com) for more on how we blend shopper expertise and behavioral science to help better “Design for the Shopper Mindset”.